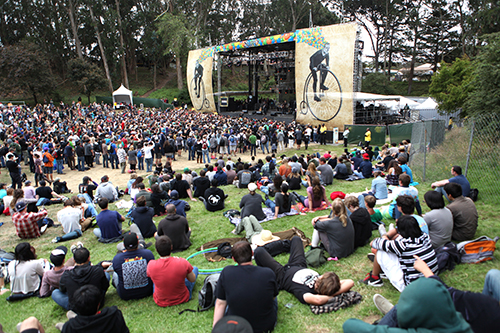 Outside Lands 2019, a must for any music lover near the Bay Area in August. Three days at Golden Gate Park in San Francisco, CA, August 9 - 11.

Everything you need to know for Outside Lands 2019

Attend Outside Lands 2019 at Golden Gate Park. This iconic summer festival epitomizes the look, feel and energy of San Francisco and the Bay Area. Having only been around since 2008, Outside Lands Music Festival has become a festival staple in the west coast music scene. They were also the first festival to have a green initiative as part of the three day event. They have drawn musicians and festival goers from around the world and with a lineup like this year's we anticipate OSL to be around for many years to come.

Shop the Evil Tickets Marketplace for the best deals on 2019 Outside Lands in San Francisco, California.

How Much Are Outside Lands Festival Tickets?
Currently, the official Outside Lands 2019 ticket site is not yet sold out on general admission 3 day passes and they are going for $434.93 each. Evil Tickets has the cheapest 3-day GA passes to OSL found anywhere else online starting at $389. Single day passes are currently going for as cheap as $193 per ticket.

The 2019 Outside Lands lineup, Headliners AND all performers are as follows:

For the complete Outside Lands 2019 lineup by day and dates visit the official OSL website.

Where Is Outside Lands 2019: Golden Gate Park in San Francisco, California
When Is Outside Lands? August 9 - 11, 2019
Outside Lands 2019 Headliners: Twenty One Pilots, The Lumineers, Blink 182, Childish Gambino, Flume, Hozier, Paul Simon, KYGO, Anderson .Paak & The Free Nationals and many more...
Where to stay: For our favorite hotels in San Francisco near Golden Gate Park we recommend the Rodeway Inn and Suites, only 0.2 miles from the venue and rooms starting at $366 / night, as well as the SeaScape Inn only 0.4 miles from the venue and rooms starting at $296 / night
Where to eat: Art's Cafe is a famous SF diner within walking distance of Golden Gate Park. Open 7am to 3pm everyday this is a great spot to grab some breakfast before cruising to the park for a show. If you're a big fan of good Mexican food check out Nopalito the sustainable organic Mexican kitchen. Also within a stones throw of the OSL festival grounds and open late stop by San Tung for the cities best friend chicken wings. Get the full official eatery list close to the festival grounds at Serious Eats.
While you’re in town: Check out the famous Golden Gate Bridge and Fisherman's Worf.
Subreddit: /r/outsidelands/
Median price for sold festival passes in 2018: $389
Buy Outside Lands 2019 tickets